* In case of any delay in receiving the OTP, you may verify it later. Please proceed without verification.

Enter your City name or Pincode

Sea transport is one of the most essential means of transport and a majority of international dealings in goods are executed by sea. Shipping industry is responsible for the infrastructure of the global social metabolism.  The seagoing ships are possessed and the developed countries use them for their trade. However, these ships are often wrecked along with their poisonous substances in the developing countries. The procedure which involves breaking an outdated ship into parts for disposal or scrapping is known as Ship breaking. 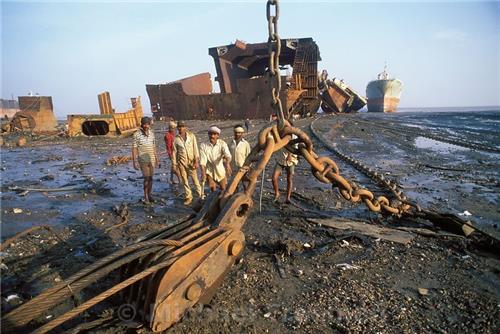 The Alang-Sosiya Ship Breaking Yard (or ASSBY) is one of the biggest ship recycling yards in the world which lies at a distance of 50 kms from the Bhavnagar city in Gujarat. This yard offers a variety of materials such as cast iron scrap, marine machinery, electric motors, melting scrap, profile plates, diesel generating sets, rolling material, marine engine and many more. These things are available in abundance and come in a myriad of qualities. All of these items are tested and licensed by England’s renowned company “Lloyds Certifying” which is well-known worldwide.

A ship named “Kota Tenjong” was the first ship which was marooned in Alang on 13th February in the year 1983. The ASSBY occupies an area of 10 kilometers on the shoreline. The ASSBY was declared as the biggest ship breaking yard in 1990s.

About the Ship Breaking Process

As soon as a ship enters the Gulf of Cambay, it is tested and verified by the experts authorities and is certified by them as well. Thereafter the ship is beached by its thrust at a high tide, whereas at the time of low tide the ship is put down on its smooth base. At this moment, the cutters and their assistants can start dismantling the ship with the help of oxygen torches and LPG gas. All these activities occur on the beach in a fairly small and packed area known as a “plot”.

After the dismantling process, the dismantled parts (life saving equipment, electrical cables, navigation equipment, utensils and furniture etc), heavy gear (compressors, boilers, engines and generators) and machinery are sold to the traders for recycle. All these functions do not need any investment in technology or infrastructure because the only thing they need is a large amount of labor. The mechanical winches and moving cranes are recycled from the same ships. 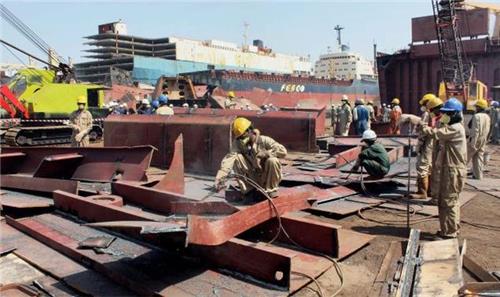 Without any load and based on their type and size, the scrapped ships weigh anywhere between 5000 tons and 40000 tons. For a normal ship of 15k tons, it takes about three to six months to break it into parts with an uneven no. of employees engaged in various stages (roughly 150-300).

Being a labor-intensive industry, the ship breaking industry requires a very low fixed capital (for machinery, plot lease and equipment) as compared to a high labor capital. The expenditure of the ship itself is higher than fifty percent of the total expenditure. The second vital thing is- interests on duties, port charges and investment.  The labor charges and energy (fuel and oxygen torches) comprise somewhere between 3 and 6 percent of the total cost. Safely, health and environmental insurance costs are not taken into account.

Vessels contain both toxic as well as nontoxic matter; both are noteworthy in toxicity and quantity which can’t be completely recycled or reused. These hazardous substances occupy about 0.5-10 percent of the total weight of the vessel. They are diverse in constitution and in general they are composed of paper, glass wool, sponge, oil, scrap wood, rubber, PVC pipes, cement, plastic, metals, thermocol, asbestos, heavy metals, radioactive junk and paints. There are no consistent statistics that can tell about the composition and quantity of the hazardous substances of individual ships. Since each ship has a different kind of structure, the estimation becomes very difficult. 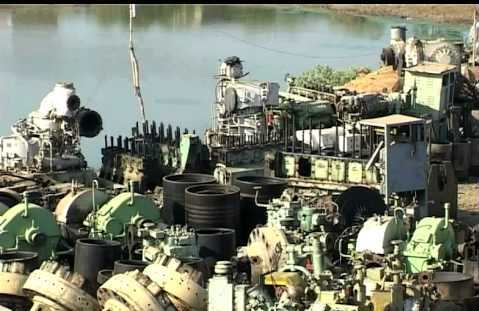 Generally there are 3 main ways for the disposal of the hazardous substances- Environmental sound management on the site, decontamination before export and last but not least is dumping. Since its commencement, ASSBY has employed the third way to chuck out the toxic waste i.e. “Dumping”. In this process the hazardous substances are freely liberated into the atmosphere. Here at Alang-Sosiya, these wastes are released in the sea either from the plot or from the ship. All these dumping operations are carried out at night in the nearby villages. Sometimes the toxic wastes are burnt on the plot itself.

During the scrapping activity numerous gaseous, liquid and solid pollutants are emitted in the atmosphere which is detrimental for human beings. Some of the most common pollutants are asbestos, oil, heavy metals, bacteria and incessant organic pollutants.

The Socio-Environmental Impacts of Toxic Waste at ASSBY

The activity of ship breaking has definitely affected the ecology of Alang-Sosiya to a large extent. There has been deterioration in the biotic structure due to system stress. There has been a decline in the biomass and species variety. The pollutants combine with the floating solid matter and travel lengthy distances that are carried by the high currents. There is absolutely no plant life in the intertidal zone lying in the vicinity of ASSBY. Earlier there were mangroves in Alang-Soiya which vanished after the place started the ship breaking industry. The fish population and their assortment have also decreased at the ASSBY area. Due to the absence of hygiene facilities for the employees, the water around ASSBY is not safe for drinking as it contains both pathogenic bacteria as well as the non-pathogenic bacteria. Moreover, the sea water near the coast has also become unsafe for the fish populace and is inappropriate for any kind of leisure activities.

Although the Pollution Control Board of Gujarat maintains a comprehensive monitoring, yet it has not succeeded in presenting the exact data. In order to do a complete evaluation on the environmental impact, not only local impacts should be taken into consideration but an entire material recycling chain also needs to be considered which includes the subsidiary industries as well. The emissions coming out from the rerolling mills are also toxic in nature because they are high in volatile organic compounds produced by the anti-fouling paints and marine paints. These toxic emissions give rise to acid rain in the monsoon time.

Impacts of Toxic Waste on the Workers at ASSBY

Majority of employees at ASSBY are migrants who come from the impoverished states like Uttar Pradesh, Orissa, Jharkhand and Bihar. These workers dwell and work in pathetic conditions. The only reason for their migration is to sustain their families. There are about 5000 to 50000 workers who work in ASSBY under the contractors on per day basis. They toil for 6 days in a week and daily they work for almost twelve hours. In the year 2009, the daily wages for veteran cutters was Rs 375 and for the loaders and helpers it was nearly Rs 150. They dwell in “Kholis” located in the vicinity of the Alang-Sosiya yard without any electricity, water or sanitation facilities. They are incessantly exposed to the hazardous wastes present in the air that they take in and the fish and water that they consume. Due to falling objects, falling from heights, explosion, compression/trapping, lack of housekeeping standards, personal protective gear and safety symbols they meet with recurrent accidents. In a demise or injury case they are hardly ever compensated. 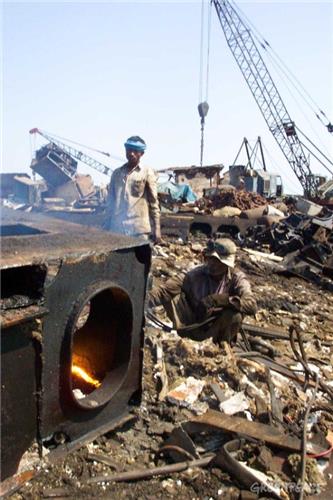 When it comes to the pollutants, the reports say that after the X ray test (by NIOH) was performed on the workers, the chest X ray reports revealed that about 16 percent workers were exposed to asbestos.

Impact on Fishermen in ASSBY

Since the inception of the ship breaking industry, the diversity, size and quantity of the fishes have declined to a large extent. Due to the toxic waste these fishes are not edible. However, these fishes can swim and reach faraway places where they can be caught and consumed. Since the area of contamination is quite wide, the fishermen can’t even go somewhere else to catch better quality fishes. Moreover, they also have legal restrictions on places where they may or may not catch fish. As a result, the lifestyle of the fishing community has also deteriorated to a great extent. Consequently, some fishermen have moved abroad in quest of better prospects while others have to toil as unskilled workers.

On the contrary to all the aforementioned socio-environmental impacts of the hazardous waste produced due to the ship breaking operations, the Sarpanch of Alang-Sosiya Mr. Gohil, declared that this industry would not stop in any case.  He also added that stopping the ship breaking industry would be a great loss of livelihood for a plethora of people. Moreover, it is necessary to think about the factors that affect the environment and take measures to check them.